Boris Johnson ‘game changing’ Brexit proposals are finished and could be sent to the EU as early as this week – amid fears Michel Barnier will immediately try to torpedo them.

UK officials are understood to have completed the legal text of the long-awaited blueprint.

It is set to be submitted to Brussels after the PM’s keynote conference speech on Wednesday in what will be a pivotal moment for the Brexit process.

However, there are concerns that the ‘purist’ EU’s chief negotiator will give them short shrift.

Senior government sources believe much will hang on whether Angela Merkel ‘comes out fighting’ for a compromise deal.

‘They are not budging yet,’ one source said.

Pressure is mounting ahead of a crunch EU summit on October 17, when Mr Johnson will make one final big play for a deal.

If some sort of package can be thrashed out it will then be rushed through Parliament before the premier’s ‘do or die’ deadline of October 31 – with both Houses likely to sit through the night.

Ministers say Labour MPs will be warned that it is their final chance to secure an orderly departure, with the alternative letting the country crash out at Halloween.

‘They will come around,’ one Cabinet minister told MailOnline. ‘If a deal comes back from Brussels it will be a stark choice.’

Mr Johnson is preparing a diplomatic blitz to coincide with the legal text, written by his chief sherpa David Frost.

No10 is not thought to have completely ruled out some kind of Irish backstop with a time limit on the Irish border backstop.

But Downing Street is adamant the final shape of the controversial cannot be the same as previously.

Sources insist the government will ‘obey the law of the Spartans’ – the group of Tory hardline MPs who killed off Theresa May’s package and have been fighting against any significant softening of the UK’s position.

If Brussels rejects the offer the pressure will grow on Mr Johnson to comply with the terms of an anti-No Deal law which states he must ask for a Brexit delay if no agreement is in place in the run up to October 31. 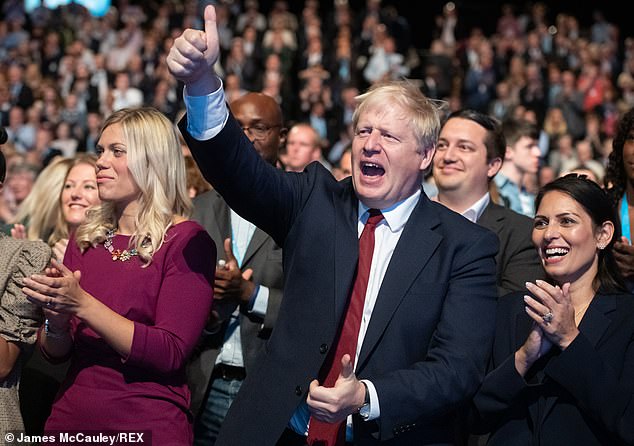 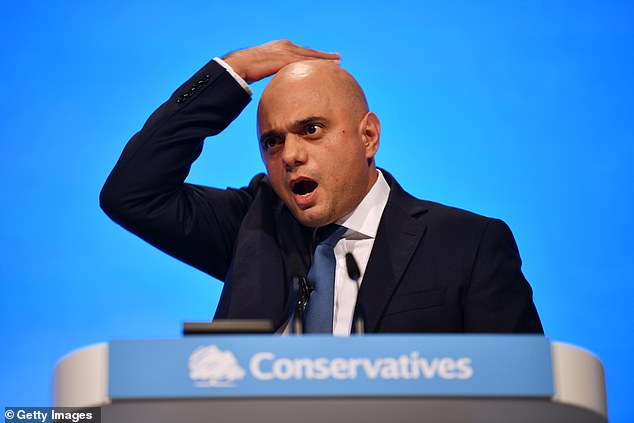 Sajid Javid, pictured in Manchester today, insisted the UK will leave the EU on October 31 with or without a deal

Meanwhile, Sajid Javid today talked tough on No Deal as he signalled he is prepared to pump billions of pounds into the UK economy if there is a chaotic split on October 31.

What happens next in the Brexit crisis?

Here is how the coming weeks could pan out:

Today 29-October 2: Tory conference is taking place in Manchester, but hampered by the fact Parliament is sitting.

Mr Johnson is due to give his first keynote speech as leader on the final day. The speech will be a crucial waypointer on how Brexit talks are going.

This week: Legal text of the UK’s new Brexit proposals set to be sent to the EU.

October 17-18: A crunch EU summit in Brussels, where Mr Johnson has vowed he will try to get a Brexit deal despite Remainers ‘wrecking’ his negotiating position.

October 19: If there is no Brexit deal by this date Remainer legislation obliges the PM to beg the EU for an extension to avoid No Deal.

Jeremy Corbyn has said that he will only let Mr Johnson trigger an election after an extension has been secured.

If there is a deal, it will start being rushed through Parliament immediately.

October 31: The current deadline for the UK to leave the EU.

November/December: An election looks inevitable, but Labour is hinting it might push the date back towards Christmas to humiliate the PM further.

The Chancellor told Conservative Party conference in Manchester that leaving the EU on Halloween was not a ‘matter of if’ but a ‘matter of days’.

Mr Javid said he was ready to deploy the ‘full armoury of economic policy’ in order to cushion a bad break from Brussels in comments which suggest the Chancellor could turn on the spending taps if no accord is struck with the bloc.

Mr Johnson will reportedly submit a Brexit offer to the EU at the start of next week.

The Times said the Prime Minister is expected to hand over a ‘legal text’ proposing a way forward, including on how to replace the Irish border backstop.

The expectation is that formal talks between the two sides would then follow.

Sources suggested that if information was leaking from those talks by the end of the week it would be a bad omen for the chances of a deal being done.

It came as Mr Javid made clear to Tory activists he believes the October 31 deadline will be stuck to.

He said: ‘Never in my lifetime has there been a political moment like this.

‘We will be remembered for how we respond and we will do our duty.

‘Responsibly, firmly, and democratically. That starts with getting Brexit done.

The Chancellor warned that failing to deliver Brexit would risk ‘tearing the very fabric of our democracy’ as he set out his No Deal preparations.

He said: ‘Every department now has the resources available to prepare for No Deal. 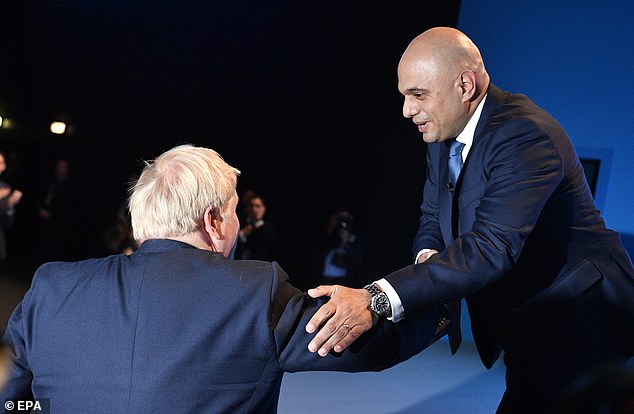 ‘I’ve tasked the Treasury with preparing a comprehensive economic response to support the economy.

‘Working closely with the Bank of England, we’re ready to draw on the full armoury of economic policy if needed.’

The last line of Mr Javid’s comments will be seen as a signal he is ready to boost public spending should there be a disorderly divorce from Brussels.

What is the Irish backstop and why is it so divisive?

The so-called Irish border backstop is one of the most controversial parts of the existing Brexit deal. This is what it means:

What is the backstop?

The backstop was invented to meet promises to keep open the border between Ireland and Northern Ireland even if there is no comprehensive UK-EU trade deal.

The divorce deal says it will kick in automatically at the end of the Brexit transition period if that agreement is not in place.

This means many EU laws will keep being imposed on the UK, restricting its ability to do its own trade deals. It also means regulatory checks on some goods crossing the Irish Sea.

Why have Ireland and the EU demanded it?

Because the UK is leaving the customs union and single market, the EU said it needed guarantees that people and goods circulating inside its border – in this case in Ireland – met its rules.

This is covered by the Brexit transition, which effectively maintains the status quo, and can in theory be done in the comprehensive EU-UK trade deal.

But the EU said there had to be a backstop to cover what happens in any gap between the transition and final deal.

Why do critics hate it?

Because Britain cannot decide when to leave the backstop.

Getting out – even if there is a trade deal – can only happen if both sides agree and Brexiteers fear the EU will unreasonably demand the backstop continues so EU law continues to apply in Northern Ireland.

Northern Ireland MPs also hate the regulatory border in the Irish Sea, insisting it unreasonably carves up the United Kingdom.

What are the UK’s new proposals?

The latest blueprint being floated would not be the same as a previous Northern Ireland-only backstop floated by Brussels, which was dismissed by Theresa May as something no British PM could accept.

That would have involved the province staying within the EU’s tax jurisdiction.

Instead, the idea is thought to be a much looser alignment of agricultural and food regulations with Ireland.

That could help avoid many checks on the border, but it is far from clear it would be acceptable either to the EU or the DUP.